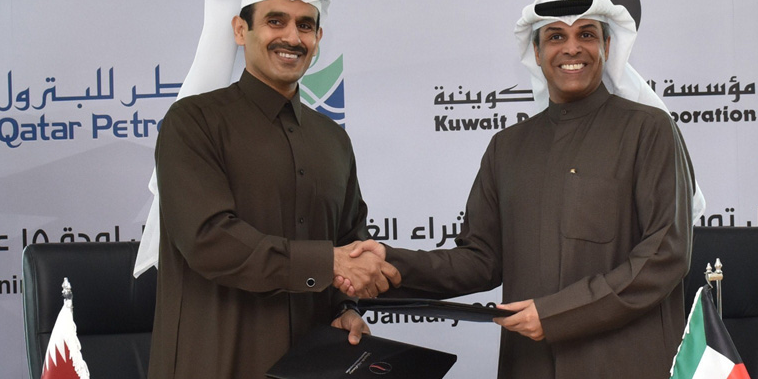 Qatar Petroleum and Kuwait Petroleum Corporation (KPC) have inked a 15-year sale and purchase agreement for the supply of up to 3 million tons per annum of liquefied natural gas (LNG) to Kuwait.

Under the deal, LNG deliveries to Kuwait’s new LNG receiving terminal at Al-Zour Port is set to start in 2022 to support meeting Kuwait’s growing energy needs and demand, particularly in the power generation sector.

“The state of Kuwait is embarking on an ambitious path of economic growth, which requires cleaner energy sources such as natural gas that will contribute to reducing emissions and improving local air quality.

“Whilst KPC is working towards increasing local natural gas production, there remains a pressing need to secure imports of natural gas supplies,” Dr. Khaled A. Al-Fadhel, the Minister of Oil and the Minister of Electricity & Water, the Chairman of the Board of Kuwait Petroleum Corporation said.

The Kuwait National Petroleum Company (KNPC), a subsidiary of Kuwait Petroleum Corporation, launched the construction of a giant terminal on the Al-Zour site in 2016.

The project set for completion in 2020, is estimated to be worth around USD 3 billion. Once completed, it will encompass a regasification plant and 8 storage tanks with an individual capacity of 225,000 m3, and marine facilities, including two marine jetties and berthing facilities for loading.

The terminal is being built by Hyundai Engineering and Construction, under the design provided by the Korean company KOGAS TECH.