Exporters Worried As US Ban On Sea Shrimps Stays 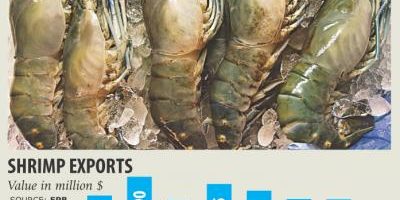 The Indian seafood industry has voiced concern at the US decision to continue with a ban on buying sea shrimps because they are caught by vessels without turtle excluder devices along the west coast of the South Asian nation, where their presence is negligible.

The Marine Products Export Development Authority recently submitted to the commerce ministry its comments on a report by the US National Marine Fisheries Service, which recommended the ban. Some exporters in Kerala, which is the worst affected, are ready to fit their boats with excluder devices to resume exports of sea shrimps.

Wild shrimps account for a minor share of the export basket compared with farmed shrimps, but exporters said they provide a good income to thousands of fishermen.

“Our export of shrimp from the sea may be about $300 million (Rs 2,100 crore) annually,” said Alex K Ninan, president of the Kerala chapter of the Seafood Exporters Association of India.

Frozen shrimp export earnings are estimated at over Rs 30,000 crore out of almost Rs 46,600 crore of seafood exports from India. Aquaculture shrimps from the eastern coastal states account for most of the exports. In the west, Gujarat is the only big, farmed shrimpproducing state. Wild shrimps are mainly from Kerala, Karnataka and Goa.

In May last year, the US Department of State prohibited wild shrimps from countries that do not comply with fishing practices to protect sea turtles. Earlier this year, a team from the National Marine Fisheries Service visited coastal states and said India is not certified to export wild shrimps to the US. However, exporters said that except in Odisha, where mass nesting of Olive Ridley turtles takes place, the presence of turtles in other states is negligible. In Odisha, there is a ban on fishing during the nesting of turtles.